Aviva's dynamism and versatility have made her one of South Africa's most popular singers. Born into an extremely musical family in Zimbabwe, her home was filled with music and every member of the family sang. In addition to Opera, Teaching and Performing qualifications, she obtained a Master's Degree from University of Cape Town. Since making her debut in the role of Norina from "Don Pasquale" she performed extensively on local and international stages, television and radio. She has worked with numerous illustrious conductors including Janos Furst, Piero Gamba, Hubert Sudant, Victor Yampolsky, Reinhard Schwarz and many others. Aviva occasionally presents programmes on Fine Music Radio and lectures part-time at UCT Opera School.

Aviva Pelham is one of South Africa's most gifted and loved artists. She sings an exceptionally wide range of music from the repertoire of opera, musicals, operetta, oratorio and cabaret.

She has dominated the stage as Violetta in “La Traviata”, or Rosina in “Barber of Seville” and is equally at home as Musetta in “La Boheme”, Susanna in “Marriage of Figaro”, Gilda in “Rigoletto”, Norina in “Don Pasquale”, Marcellina in “Fidelio”, Adina in “L’Elisir D’Amore”, Zerlina in “Don Giovanni”, Oscar in “Un Ballo in Maschera” receiving consistently rave reviews.

In addition, she has starred in the leading roles in operettas including “Die Fledermaus”, "La Belle Helene", "La Perichole", "Night in Venice", “Student Prince”, “Great Waltz”, Yum Yum in “Mikado” and “Merry Widow” as well as countless musicals such as “My Fair Lady”, “Sound of Music”, “The King & 1”, “Fiddler on the Roof”, “Man of La Mancha”, “Kiss Me Kate”, “Into the Woods” and “Kismet” notching up over two thousand performances and delighting audiences all over the world.

Aviva has directed countless fundraisers for the arts and various charities.

Most recently Aviva has worked extensively with the Cape Town Philharmonic Orchestra, directing the 2018 Community Debut Gala, the Community Gala in February 2019, the Community Spectacular in October of the same year and in the midst of the Covid pandemic, the 2020 Community Spectacular, which was filmed and released on-line. Her partnership with the CPO has also included directing SoundsCape with the Cape Town Philharmonic Youth Wind Ensemble (CPYWE), as well as performances by Heavenly Quartez, accompanied by the CPO, in Khayalitsha and at Artscape and Oude Libertas.

A reflection on the life of South African opera singer Aviva Pelham. In a career spanning almost 40 years, Aviva continues to communicate and cross boundaries sharing her own particular brand of dynamic entertainment.

During her illustrious career, Aviva has been recognised with the following awards: 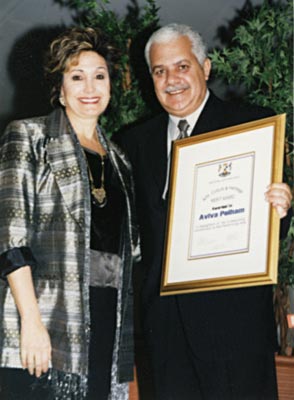 Aviva took part in the ‘Celebrate South Africa” concert at the Royal Festival Hall, London, in 2001. She has sung for prominent figures including Queen Elizabeth II, Heads of State and for Nelson Mandela on several occasions.

She starred in the television version of ‘King and I', performed at the International Opthalmologists’ Conference in London, ( at the Natural History Museum), launched the CD Songs ‘For a Year and a Day’, also in London, performed at the opening of Louis Janse Van Vuuren’s Art Exhibition in Paris as well as several concerts in Israel.

Her performances in “Divine Divas”, celebrating S.A’s rainbow nation are in great demand on QEII and other international cruise ships including the Princendam, the Amsterdam, Crystal Serenity and Crystal Symphony.

Aviva received critical acclaim for her presentation of a musical educational program for World Presidents’ Organization in November 2006, as well as for her 120 performances in "Queen of the Opera".

Aviva's remarkable contribution to the Performing Arts was recognised with a Gala Tribute Concert in Cape Town - "VIVA AVIVA". 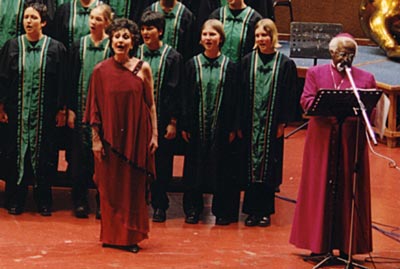 Performance of 'St. Francis of Assisi' with Archbishop Tutu

Aviva is extremely involved in community upliftment and outreach work. She teaches and mentors young talent with outstanding vocal gifts from previously disadvantaged communities, training them to develop into young professionals, sharing her platforms with them in ‘Aviva and Friends’ in order to give them experience, exposure and to launch their careers.

Education
Aviva directed ‘Viva the Voices’ - a group of highly gifted young opera singers on an ongoing basis, taking their educational, entertaining programme to previously disadvantaged schools, where they become role models to countless young children. Her ‘Viva the Music’ is an edutainment concert mounted annually on Youth Day introducing the instruments of the orchestra to children, played by children. 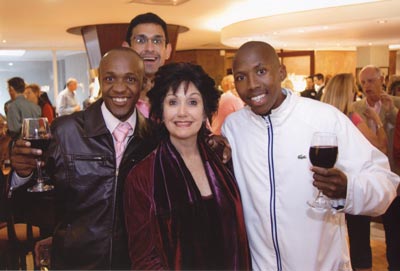 Motivational Speaker
She is a popular and highly entertaining motivational guest speaker for many not-for-profit organisations and she works closely with young singers at Cape Town Opera, passing on some of her invaluable experience.

Fund Raiser
In order to provide an ongoing fundraiser for the oncology department at the Red Cross Children’s Hospital, Aviva created a CD, “Viva the Children” featuring outstanding South African singers and choirs. She also narrates with orchestra stories for children.

Aviva is passionate about healing and communication through music and has worked with the Blind Choir from Ikamva Labantu, Hermanus Street Children, the Homeless, the Pollsmoor Prison Choir, Monkeybiz Aids Choir, Amy Biehl Foundation music programmes, the SA Circle of Dance Academy, the Brass Band of the Young Lions Project in Manenberg, as well as Friends of Hout Bay Music Project. 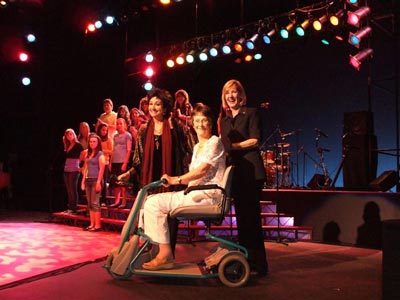 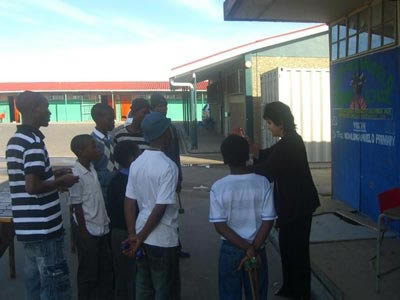 The daughter of a Polish father and German mother, Aviva's relatives are scattered all over the globe.
For more about Aviva's family, click the Family Tree link below: